The Life and Death of the Luer Lock Syringe

The Life and Death of the Luer

The common luer—once a simple fits-all solution—now creates considerable complications in increasingly complex medical environments. Widespread use of the luer connector has become too much of a good thing. For more than 110 years its simple design made the luer economical to manufacture and easy to use. Today its simplicity threatens patients’ health and physicians’ outcomes.

The luer connector design allows direct or functional connection between unrelated delivery systems, including vascular, enteral, respiratory, epidural, and intrathecal medical devices, as well their components and accessories. And multiple connections between medical devices and tubing are common in patient care.

Despite its modern-day difficulties, the luer has a rich history. Luer connectors got their start in 1896 when Karl Schneider, an instrument maker for the H. Wulfing Luer Company of Paris, France created an all-glass syringe that consisted of a glass cylinder and glass plunger with no additional “packing” material to create the seal between plunger and cylinder. A variety of syringes and related products with Luer-type connectors appeared in the company’s catalogs in the early 1900s for a variety of applications, from hypodermic and intravenous injection to urethral and uterine instillation.

In this original locking form the male and female parts, each featuring a 6% taper, allowed a clean press fit. The simple design created a strong hold that could be accomplished in a variety of materials—glass, metal, and eventually, plastic.

The next major development solved the problem of keeping needles firmly fixed to syringes when pressure was applied during injection. In 1930, a patent for the Luer-Lok connection was granted to Fairleigh S. Dickinson, cofounder of Becton Dickinson. The addition of locking flanges addressed the Luer’s tendency to pop open under pressure and enabled users to connect the needle to the syringe by twisting to engage interlocking cams.

The Luer-Lok connector locks and unlocks with a twist and remains locked. Due to these features, this simple, effective and economical connector gained attention in a wide variety of medical applications. (Roughly 20 years after the Luer-Lok patent was issued, the luer lost its proper-name status. Except for specific references to events after 1950, luer-lock and luer are lowercased.)

Before and after development of the Luer-Lok, various tapered connectors found expanded use in medical applications particularly involving syringes.

The 1925 S. Maw, Son, and Sons catalog includes a Rose’s “antrum instrument” for use in nose and throat surgery. A tapered connector is used to attach the cannula.
A 1930s Charles Lentz & Sons catalog includes a variety of lachrymal syringes for irrigating the tear ducts and nasal instruments with tapered connections for washing and suction.
The Allen & Hansburys Ltd. catalog included a “Record” syringe with needles. Record and Luer connectors coexisted until the 1980s.
The 1943 V. Mueller & Company catalog illustrated a variety of connectors for medical applications, including the Luer-slip (trademarked by Becton Dickinson), Luer-Lok, small French slip, large French slip, standard thread, Record slip, 606 hose end, ¼″ tubing.

In 1954 Becton Dickinson introduced a disposable glass syringe for a test of the Salk polio vaccine. Over a period of three weeks the syringes were used to vaccinate more than 1 million children in 44 states. One year later, Roehr Products introduced Monoject, the world’s first disposable plastic syringe. In 1961, Becton Dickinson introduced Plastipak, a disposable plastic syringe. However, because many believed sterilization of reusable syringes was economical and comparably safe, there was little demand for the products.

The fate of the reusable syringe was sealed when Dr. Albert Weiner was convicted on 12 counts of manslaughter in December 1961 after a dozen of his patients died of hepatitis attributed to the reuse of infected syringes. Demand for disposable syringes skyrocketed, and within a year, disposables secured one-third of the U.S. needle market. The mass production of plastic luer-type syringes, in turn, led to the growing use of plastic luer connectors in a variety of applications. That expanded interest and use could now lead to its contraction in the medical marketplace.

Expanding Use of the Luer

Advances in thermoplastic technology allowed manufacturers to mold plastics in precise parts and dimensions, making luer connectors easier to manufacture. They were rapidly adopted in a variety of medical applications. In 1961, for example, a method for percutaneous transvenous catherization was described as using “dialysis tubing fixed to a Luer-lock at the end of the venous catheter.”

During the 1960s industry consolidation survivors Abbott Labs, Baxter, and B Braun dictated fit, form, and function of intravenous (IV) connectors. They settled on the luer and luer-lock connectors and agreed on dimensions and materials as they moved away from metal and glass. Connecting metal and glass together could result in cracks, leakage and/or entrainment of nonsterile air leading to infection.

The luer style was selected because it was reliable, and inexpensive to manufacture, and therefore purchase. It also had a simple design that worked with few complications, and allowed device manufacturers to make items that would easily connect with other products.

Indwelling catheters, such as the PICC line, drove the development of new luer-type connectors. The female connectors on the indwelling catheter represented an open system that was capped using a closed-end male luer-lock connection—essentially a cork. The cap could be removed to provide access, but it provided an opening for infection. The alternative closed-system connectors were permanently capped with a rubber injection port through which a needle could be inserted to draw blood or introduce medication. The closed injection port used a male luer connector attached to the female luer at the end of the indwelling catheter.

In approximately 1978 the ANSI Luer Taper Standard was issued, the first-ever parenteral device connection standard. (Other standards from the EU and Japan came later.) The nonstandardization of materials and dimensions had resulted in deaths, injuries, misconnections, and taped connections. The new standard allowed an approximately five-year phase-in period to develop new molding machines and use existing inventory.

In the 1980s, rising concern over needle sticks as a cause of hepatitis and HIV transmission led to the development of needle-less technologies. Blunt plastic cannulae replaced metal needles as a means of entering the closed system through the rubber port. Luer-activated devices (LADs) performed a similar function, creating a leakproof seal that opened automatically when a suitable luer-based connector was attached to it.

In complex IV systems, stopcocks allow delivery of various materials to be turned off and on without opening the system, providing individualized control over multiple materials being introduced through the same line. These modular systems, largely created using lures, allowed a level of control over the delivery of drugs, blood, and other materials and reduced the opportunity for infection.

At the same time, luers were being used to connect gas delivery lines for applications such as limb cuff inflation. Patients in operating, recovery, and emergency rooms could have dozens of luer connections delivering a variety of gases and liquids.

By the late 1960s, the luer had largely supplanted the more slender Record connector due to the marketing dominance and technological leadership of U.S. companies' intravenous (parenteral) products. U.S. dominance of the IV market in terms of IV bottles, IV bags, kits and trays and the associated sets and devices, all revolved around the use of the parenteral luer.

The luer connector had become the de facto standard in the U.S. by 1980, however most European users employed the Record (sometimes referred to as Rekord) connector. Interestingly, the luer was not formally defined as a standardized small-bore (inside diameter less than 8.5mm) connector until 1986. (It is defined in ISO594-1 and ISO594-2 and described as a “conical fitting with a 6% taper for syringes, needles, and certain other medical equipment.”)

The luer’s place in medical history was solidified following investigations of an August 1988 midair collision at the U.S. Ramstein Air Base. (See the sidebar "Air Show Disaster Elevates Luer Connector.")

What the Future Holds

Luers have a long, storied history and possibly a replicated future. But there will be changes in form and function, if not fit. National committees and international working groups are driving the changes, as are researchers and users. The question of what the future holds for the simple luer might be answered in the new options manufacturers are offering.

What was once a simple solution in a simple time is now being replaced with a more appropriately straightforward method: matching connectors for each media and purpose. Even where general luers may still be used, they likely will see design changes. Applications in which luers are no longer are allowed will see significant change. And, as medical applications advance so must the connector industry’s progress.

Connector manufacturers are adopting unique closure and fitting applications including color-coding, audible signals (a click when the match is right) and radio frequency identification (RFID).

Matching-color sets can reduce the risk of mistaken connections. Textured closures can simplify and ease the mating process. Audible indicators clarify whether the proper closure has been made. RFID signals warn of misconnections, declare good connections, and record the findings. Colors, textures, and connection options are just a few of the possibilities being considered to meet stricter requirements, and also retain the luer’s low-cost appeal.

Given safety concerns and new standards that restrict their use, luers will either decline in use or change dramatically from a design that has seen few alterations throughout its lifetime. The popularity of new and different connectors such as quick-disconnect couplings continues to rise, because these advances offer greater protection and confidence in accuracy and closure success.

Manufacturing innovations are making these critical safety options more accessible and affordable as luers are phased out of many medical environments, where standards risk mitigation call for safer new approaches. Luers might still be used for vascular access; however, the focus is on new connector designs that specifically address the prevention of misconnections in other applications.

Certainly it is the buyers’ and the manufacturers’ responses to the standards committees that spell the fate of the luer. ISO 80369 will test the industry’s willingness to turn from a tested, but now questioned, low-cost technology toward new, potentially more costly, but safer connection options. Likely the widespread use of luers will diminish. No one technology will replace them. The fun part will be to see what comes next.

Jim Brown is business unit manager for medical markets at Colder Products Co. He has been customizing fluid connections for more than 20 years. His expertise includes applications for medical devices such as blood pressure monitoring, dialysis, and surgical equipment. He has a B.S. in mechanical engineering from the University of Minnesota, Institute of Technology. Brown is a member of LifeScience Alley and AAMI and currently serves as a US Expert to ISO Technical Committee 210/JWG4 developing standards to prevent misconnections of small-bore connectors.

The QD Syringe Systems team is working on the first of its kind revolutionary patient only syringe (ISO-80369). With color-coding, matching-color sets and it's very own mating neutral displacement needleless connector and IV tubing. It is time to rethink medication deliver. 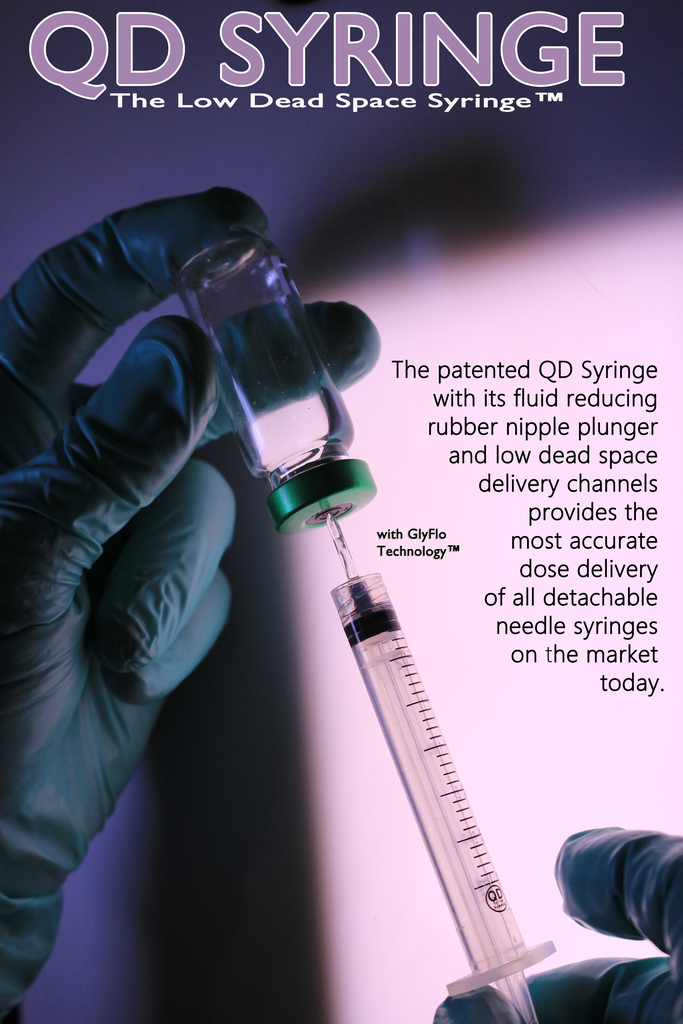